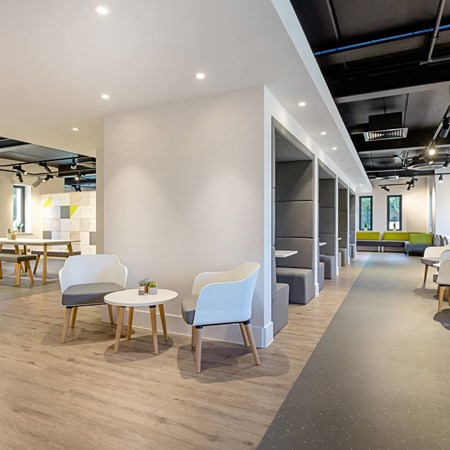 A GOOD BREAKOUT AREA IS A VALUABLE MULTI-USE SPACE.

Some people think that Breakout Space design is just placing some wacky soft seating and bean bags in some otherwise dead space. The Breakout Space is often thought of as just a space for staff to take a break, relax and recharge their batteries. However the breakout area is becoming an increasingly important area as new work practices gather pace. A good breakout space design creates a multi-functional area that can also be used for informal meetings and quiet work.

THE OFFICE BREAKOUT SPACE SHOULD BE A VALUABLE WORK AREA

The term ‘breakout space’ is really a misnomer. It suggests to staff and management that if they are seen there they are assumed to be having a break. The fact is that, with the right technology and environment, a breakout space becomes an invaluable work area. The breakout space design should make it easy to have informal meetings on the spur of the moment. This, in term, reduces the demand on traditional meeting rooms. Consequently good breakout area design should reduce delays in projects and decision-making due to meeting rooms not being available.

THE OFFICE BREAKOUT SPACE AS A PRODUCTIVE MEETING AREA

Meetings held in a more informal space are also more productive for brainstorming and idea generation. There are many new designs for multi-functional breakout area furniture that have come on to the market in recent years. However one favourite is the Media Bench which enables a number of persons to easily connect their portable devices. This allows them to share information on to the large LCD screen at the touch of a button.

PROS AND CONS OF BREAKOUT SPACES

Also take a look at this interesting BREAKOUT SPACE DESIGN CASE STUDY for SPI Lasers in Southampton, Hampshire. This staff breakout area project turned a blank space into a vibrant breakout space. Their old canteen had only been in use at lunch times whereas the new area is a multi-function space in use all day. It is used for team meetings, brainstorming and 1-2-1 meetings and also lunch and breaks.

In addition another useful collection of design ideas for breakout spaces is Office Snapshots.